Excerpt from the 1976 publication of “Keeping Our Heritage Finland, Minnesota 1895-1976”.
This publication is available for purchase at the Gift Shop at the Finland Minnesota Heritage Site.

Note from Hulda Beck: I was disappointed when I read the article on Finland in the Minnesota Suomi History. The person who gave the account was not very accurate. I can understand that, as the only person living who was witness to those first years, is Mrs. Alma Tikkanen, and she is in the nursing home in Two Harbors.

I was five years old in 1903 when my parents, Andrew and Elvira Beck, petitioned for a homestead of 160 acres in what is now Finland. In the spring of 1904 we left Duluth on the ship “America” (since then sunk in Lake Superior). We had to leave the ship 1/2 mile from shore at Crystal Bay as the rocks and shallow water prevented the ship from coming closer. We climbed down a rope ladder to a small fishing boat. There was no pier or dock and I can always remember how scared I was when I hung over my father’s shoulder as he carried me down the swaying ladder. Then we started on foot along rabbit trails into our unknown future.

Father carried a packsack of food (about 100 pounds) and ,my 1 year old brother, Andrew, Jr. was carried in turn by mother and father. I walked behind and sometimes ahead. After about five miles we came to the home of a bachelor named Jentsch, where we spent the night. I think he was the first settler, his neighbor was Mike Schultz. Evert Hakkarainen was also one of the first settlers. It was to the Hakkarainen’s where we were headed. In the morning we ate Jentsch’s sourdough pancakes and resumed our journey. By evening we arrived, tired and hungry, at Hakkarainen’s little 10 x 12 cabin, where we lived for four months. There were four two-decker bunks with cedar boughs. There were six men staying there, making a total of 12 people altogether. Of the eight adults, four later died of TB, my mother was one of them.

My mother made a hammock from a sheet for my brother and wild animals would come to see what the odd contraption was that was hanging in the trees. There were no horses. The men helped each other clear land and build a cabin for each family. Mother wasn’t idle either. She cooked for 12 people, washed clothes in lye water (she made the lye from birch ashes). and in between she hacked away at the brush. By August the men had built five cabins, to make the first settlement in the Finland area. Mother was expecting a baby in February, so we went back to Duluth for the winter.

In the spring of 1905 we again came back by ship. There still were no horses but several men were there to meet us and help carry our possessions. Everything from a cook stove to the last spoon had to be carried by packsack the ten miles inland. Mother carried my three month old brother and the men carried two year old Andrew along with their packs. I carried the cat, and the dog ran alongside.

In the spring of 1907 we bought a cow which was also brought by ship to Crystal Bay. She was dropped into the lake with a long rope on her horns and she had to swim ashore and then walk the ten miles home.

The first school was on John Haveri’s property and 18 year old Mary Lorntson was the teacher. Desks and benches were sawed by hand from logs. I was the only one who could talk English so I had to help translate between the teacher and the other pupils. At Christmas, 1905, we held our first Christmas program at the school. It was a beautiful night – not too cold and the snow was gently falling. The snowflakes were so beautiful. Earlier in the day the children caught the flakes on black material to see how beautifully they shone. In the evening the Esa Manttari family came with a long sled he had built. He had his six children in the sled and he pulled the sled and his wife pushed from behind. Then at our place three more were added to the sled and we went to celebrate our first Christmas and it was an occasion I will never forget. We had a Christmas tree with candles that my mother had remembered to bring. The children stood and admired the beautiful tree. Then we had coffee with canned milk which Mrs. Haveri had thoughtfully provided. At home we drank our coffee black. No one had a cow at that time. There were no presents and we didn’t expect any, but the children got to take home the many colored candle stubs from the tree.

The next Christmas was just as joyful, and even more so for our family, as father put a wood floor in our cabin. If you have never lived in a house with a dirt floor you can’t realize the happiness a white wood floor can bring. It was like heaven on earth – we were rich! And so contented, we couldn’t have asked for more from life.

I forgot to mention how close we came to not having our first Christmas celebration. That fall, in October, there was such a storm on Lake Superior that when the ship brought supplies at the end of September, it never came back until May, when the ice left the lake. Each of us had received provisions on that last trip – 200 to 300 pounds of sugar, 400 to 500 pounds of flour, 100 pounds of coffee, salt pork, some prunes and raisins. Also about five gallons of kerosene for each family. Only one trip could be made in a day to carry the provisions home by packsack. Only a small portion had been brought home when the storm broke up the poorly constructed storage shed. Everything got wet and to top it off, the kerosene spilled on the foodstuff. We had to dry the flour, sugar and coffee and use them, either that or starve. So our Christmas coffee and buns were flavored with kerosene, but by that time we were used to the taste. Maybe it was good medicine as no one got sick that winter, not even a single cold!

I think Alger-Smith built the railroad in 1908. That was a time for celebrating. Everyone gathered in our yard to meet the first train, which consisted of the engine and one passenger car. The railroad officials passed out oranges and candy. They asked what the new landing should be called and suggested Beck’s Landing since it went by our house. My father refused to let them use his name, so he called the settlers to a meeting at the school and “Finland” was the unanimous decision. Mrs. Haveri again served coffee but it was black again as no one had cream. God created two of each species and we only had a cow, so we had to butcher her when she quit giving milk..

I believe it was also 1908 when the community decided we should build a hall so we could socialize more and have dances, plays, etc. The Lindstroms had a big house with two rooms! Others only had one. So a masquerade party was held at Lindstroms. My father was a carpenter by trade so he built a small replica of a hall and put a sign “Hall Fund” on it and an opening for donations. He made me a costume out of newspapers and I walked around with my “hall bank” and received donations from everyone, and we soon built a hall. We didn’t have time to enjoy it long before a forest fire wiped it out. It didn’t damp en our spirits and it wasn’t long before we built a new and bigger hall, which is still standing (now Kesingers <Now Honor Schauland’s>).

Also in 1908 a new school was built near the railroad station, called Baptism River School. The teacher suggested the name and all the children approved the decision. Now that school is gone only memories remain.

In 1911, father started a small general store and sold out in 1914. He sold the store inventory to the newly starting Co-operative store. He moved to Virginia and then to Two Harbors in 1915. He built a store in Two Harbors.

From there he moved to Port Arthur and then Astoria, Oregon where he died in 1947. My father’s store in Two Harbors was later owned by Matt Tenkanen who had come from Isabella. Isabella was known as “Horjoppi Kontri” (Hurry Up Country).

I forgot to mention the names of the five homesteaders besides the Hakkarainen’s. They were Moisio, Huuskonen, Manttari, Haveri and Tikkanen. 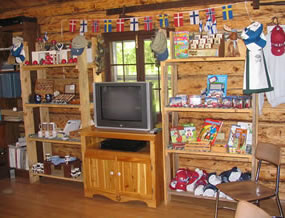 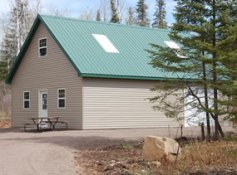 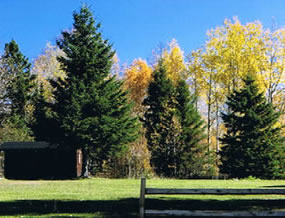 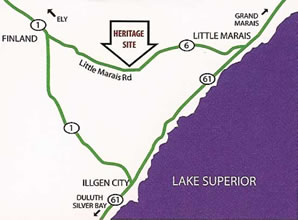 The Heritage Site is open to the public from 11 a.m until 4 p.m. on Thursday until Monday of each week from mid May until mid October.